This weekend I felt inspired by the new Moss&Mink Aeryn Kitchen, so I started to decorate one of my Linden Homes. I started arranging the kitchen pieces, then logged off to run some errands. When I came back to the house, someone had opened all of the cabinets and appliance doors. It’s okay to touch/inspect an object for the creator’s name, but not okay to repeatedly annoy.

END_OF_DOCUMENT_TOKEN_TO_BE_REPLACED

All is fair in Game of Homes (GoH)

**WARNING** This is a GoH post, it will make no sense to my regular fashion readers.

Let’s talk about this week’s Virtual Secrets. It has been over a decade since someone found me interesting enough to make a secret about me, so let’s talk about everything regarding this secret.

Linden Lab created a competitive environment, where they would only release one region at a time, so all of the homes are immediately snapped up within minutes. The best time to roll for a new home is during a new release and/or rolling-release (massive release of a new theme).

To add on to this stress, every premium account only has 5 abandons per 24 hour period, so even if many homes are available, you are limited in your chances to try. And unless you are rolling the minute you watch a region release, it’s incredibly hard to target a region.

When you are a Linden Homes enthusiast like me, you make some GoH friends along the way, these are the people that you run into all the time, on pre-released regions cos you both want a home on those regions. It’s true that I have a few Linden Homes, many of them I rolled during a rolling-release, and few were given to me by friends.

END_OF_DOCUMENT_TOKEN_TO_BE_REPLACED

The 5th Linden Home theme is Log Homes! I’m kind of surprised since it’s pretty much more of the same. I am a huge beach home fan in SL, but I really want a snow chalet too, for some magical Winter wonderland photos. Go check out the Log Homes in-world before the launch.

Do you currently have a Linden Home? Do you want a Log Home? Let me know in the comments!

Hello from Bellisseria South, the long-awaited Victorians have now been claimed by thousands of happy new homeowners. During the Linden Reveal 3 weeks ago, the southern addition to the continent was not public access, so we didn’t get to see the actual regions until the launch on December 16th.

END_OF_DOCUMENT_TOKEN_TO_BE_REPLACED

“Hey Cake! Where’ve you been?” Drawing comics for money and enjoying life. I’m working on a comic book for a mainstream company now, so I’m pretty excited! That series will be released in August. Nationwide. I’m a pro now!

But that’s not why I’m writing this, right? Let’s talk about Linden Homes!

I managed to check these out when the Home and Garden Expo was running, and the preview was pretty cool. So when they were released, I hopped on the chance to snag one. Gogo and I registered around the same time, so I was hoping to get one on the waterfront like she did. Just so you know–homes are randomly assigned! BUT, all of these houses are landscaped very nicely. I didn’t get one on the waterfront, but I still love my house anyway.

END_OF_DOCUMENT_TOKEN_TO_BE_REPLACED 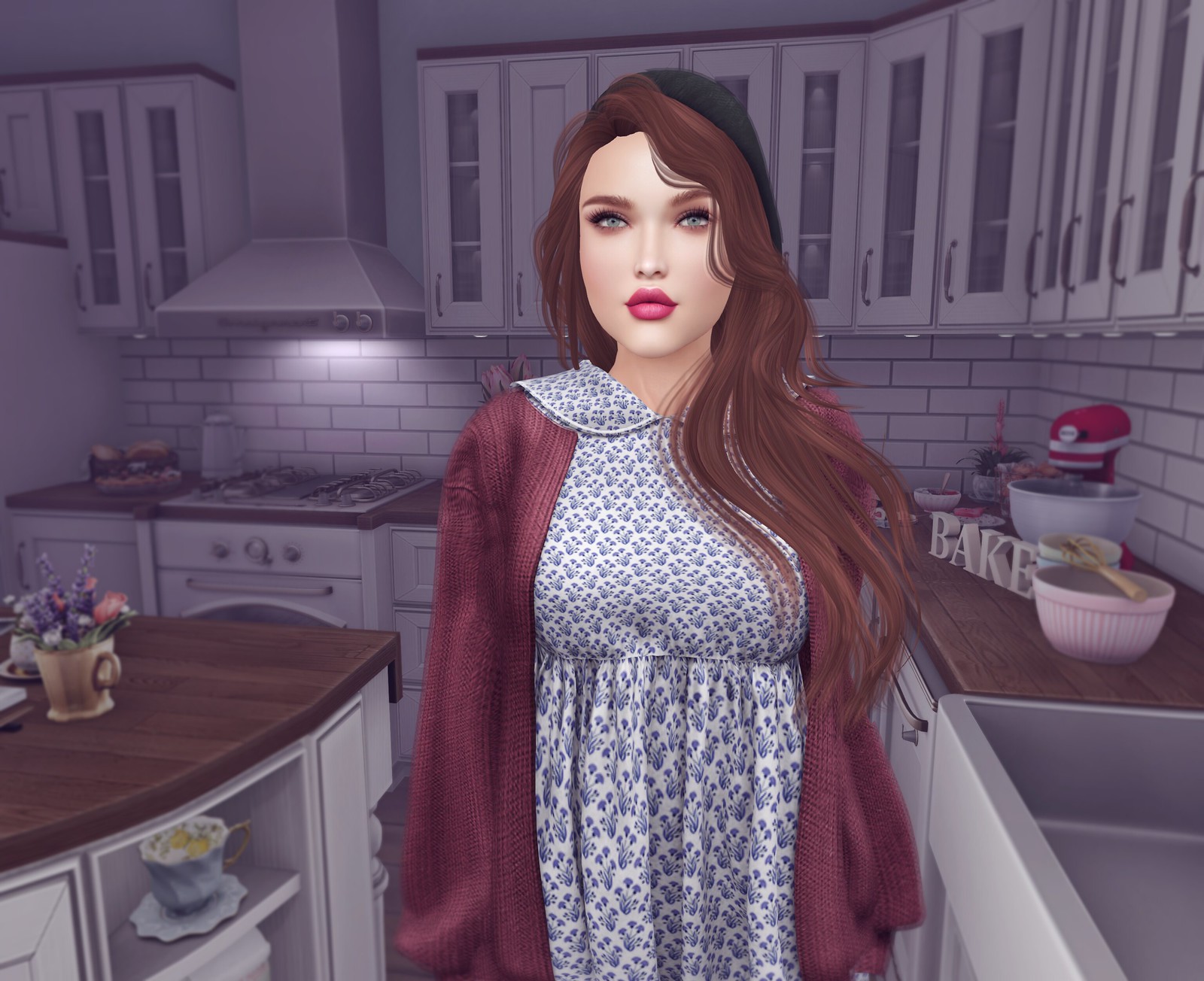 I have done nothing but shop, decorate, shop, decorate! I love my new Catia Kitchen set from Consignment. I have used decor from various brands for years to make a vintage kitchen, but I felt the need for change. This new set is modular, and very easy to assemble to fit any kitchen. I don’t like to change my decor often, but this change is definitely much-needed, since it also pushed me to update my living room and other corners of my home. 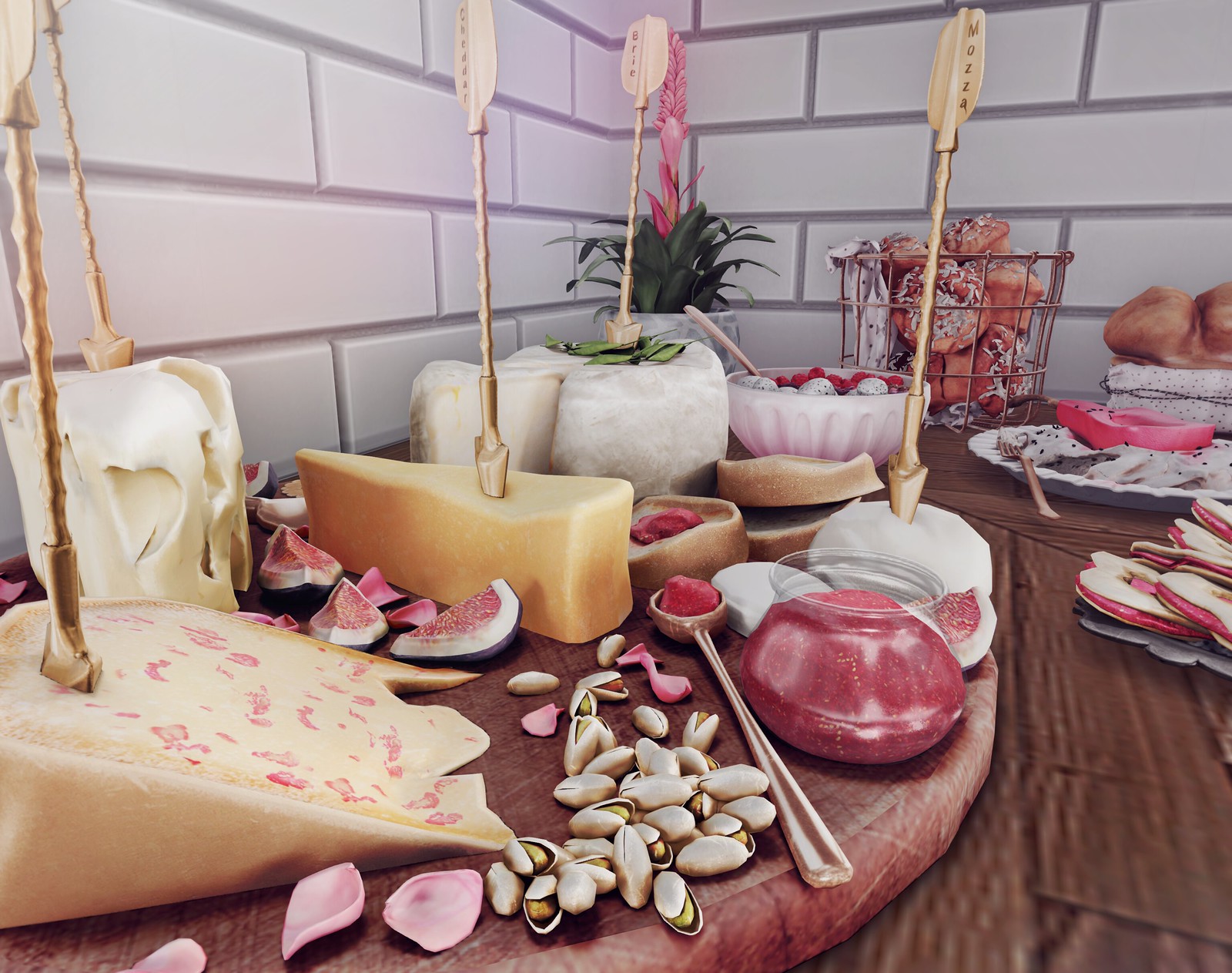 A new kitchen set calls for new food!! Isn’t this set of brunch food from Dust Bunny fantastic? It’s a gacha, but it was actually fairly easy to complete the set since it’s a small set. 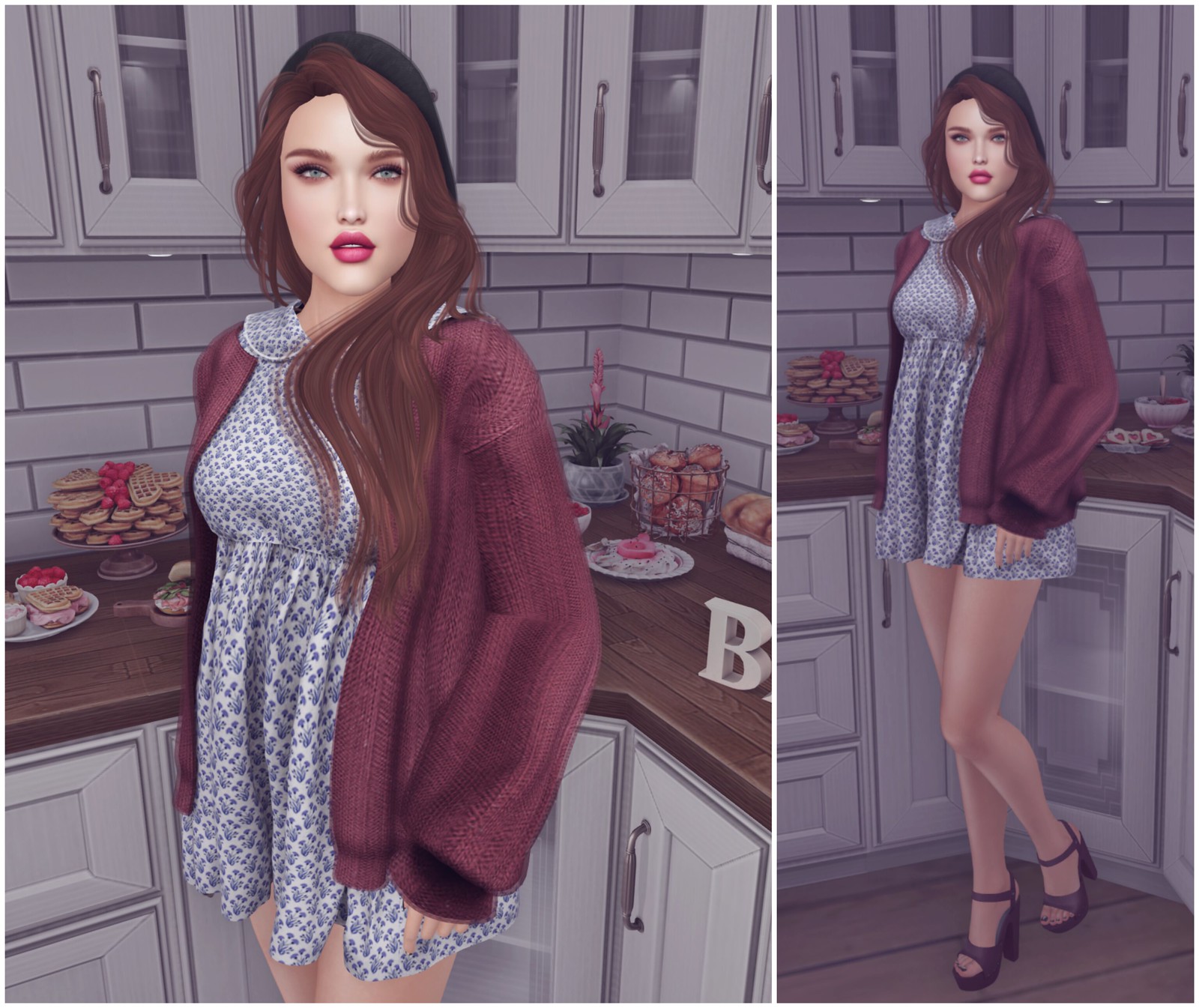 Autumn is here! It’s cold outside, so I am loving all the sweaters and beanies in SL. I love this Amitomo dress at Sanarae, it’s a gacha, but I won’t complain since I won the dress after a handful of tries. Exile released perfect autumn hairstyles at Collabor88 this month! I am wearing Full Circle, it comes with a color-changing HUD for the cap. 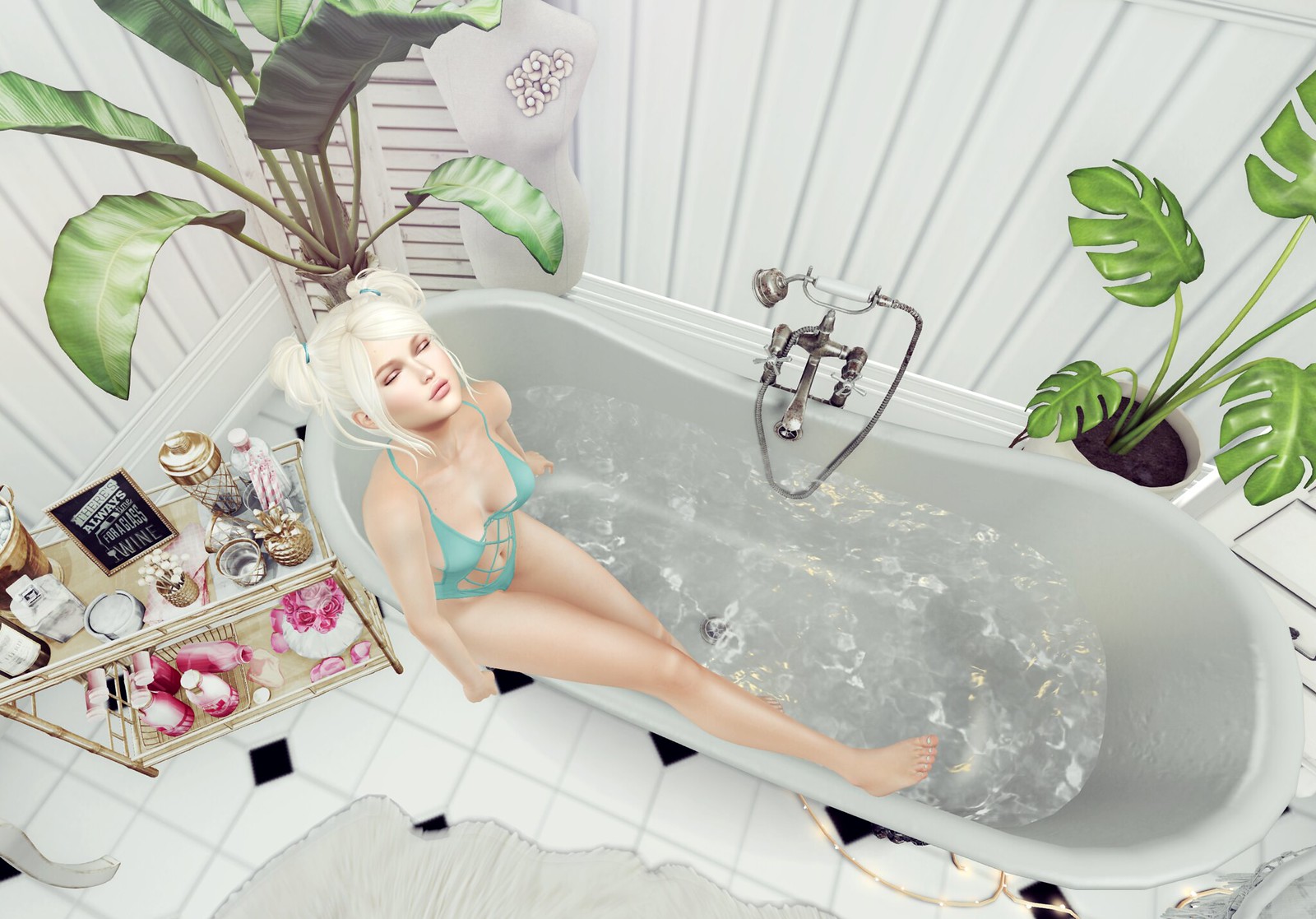 Avatars don’t need to bathe, but I still liked the idea of having a tub in my home. I don’t need a kitchen or a bedroom, but I have them, so why not a bathroom? I stumbled upon this Victoria Clawfoot Tub from Apple Fall and fell in love. I can’t remember the last time I bought any bathroom decor, so this tub is super special. The vintage design is gorgeous and the water is best water that I have ever seen in any tub in SL. The tub comes in two colors – Enamel and Iron. My room is very white, so I decided to use the Iron colored tub to add contrast. 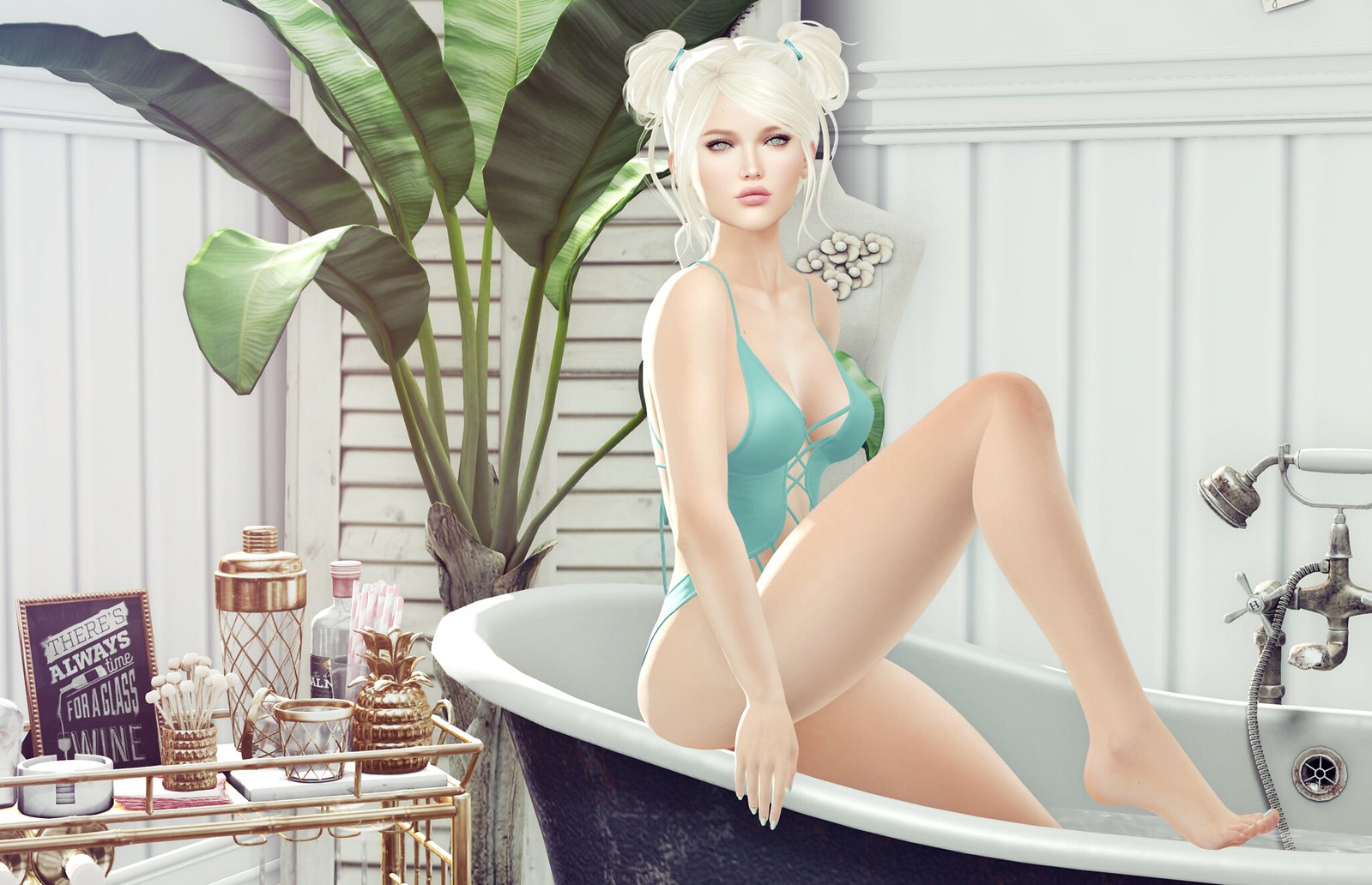 Even though I love the tub, the animations included are not great. I tried the single poses, and all of them were bathing animations, not really suitable for still photography. I made my own poses for the photos above; it was super satisfying. I hate furniture with fidgeting animations with a passion. 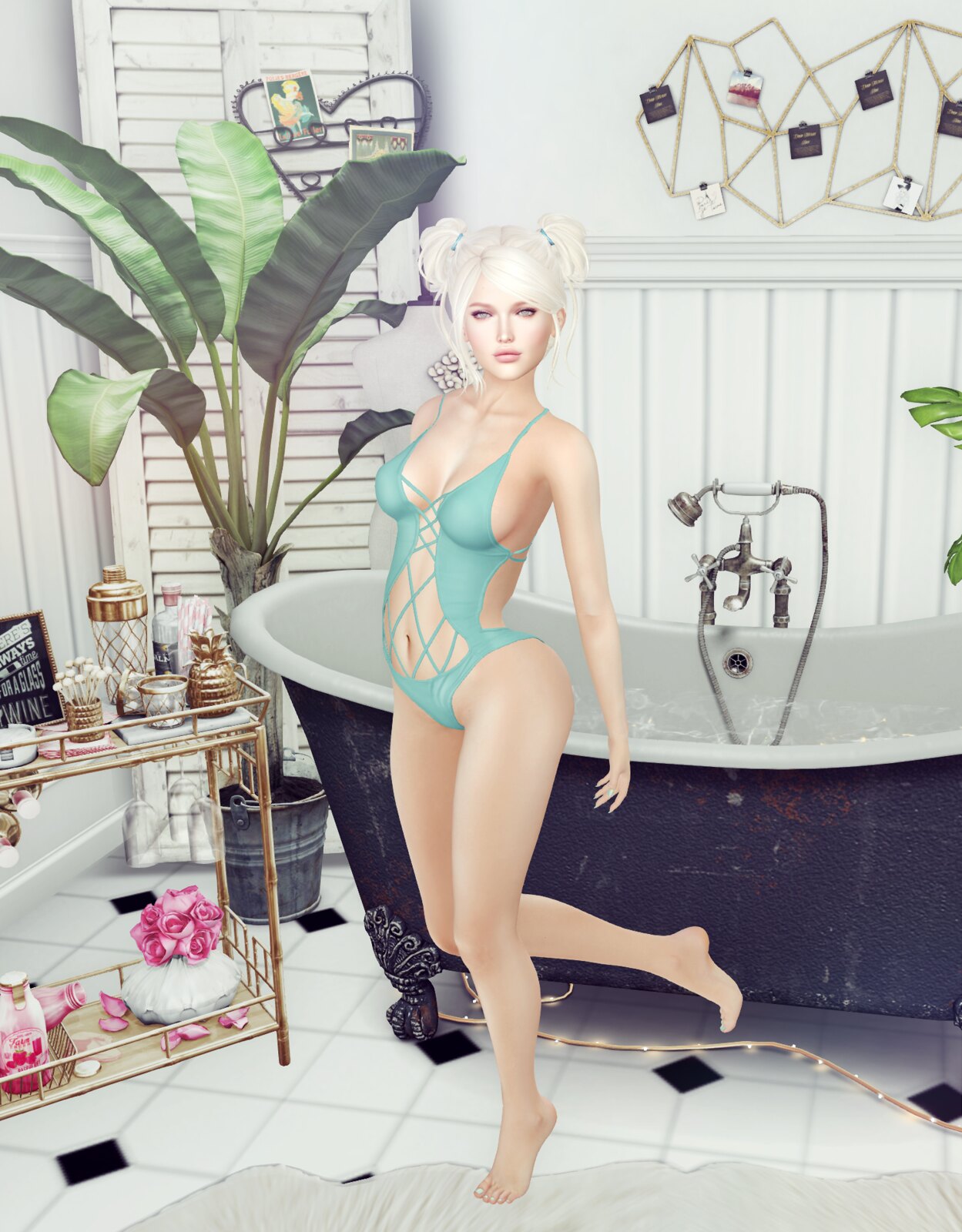 You have to get the new dance pole from Dutchie if you love dancing in SL! I threw so many parties with the Sine Wave dances that this brings back a lot of memories. I remembered that Melanie and I were always dancing when we were noobs; I just know she would be thrilled to with this updated dance pole. I was never a dancer in SL, but I craved animations cos our avatars were so awkward and stiff.

I saw a video that Dutchie posted on her Flickr, and felt inspired to do my own. I haven’t made a video in a long time, so my editing is sloppy but it was a super fun project! I hope you guys like it!

Filmed at my home, if you want to see a “house tour” let me know in the comments! 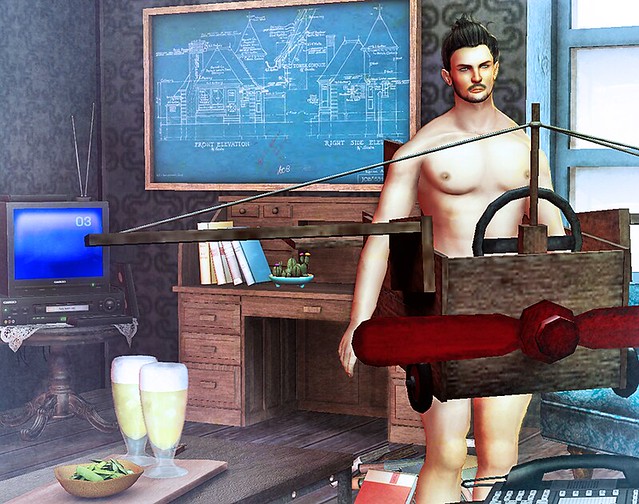 Shopping for men’s fashion in Second Life can be punishing, can’t it? Events that start out aimed at men get taken over by women’s fashions. Lack of clothing available for your favorite mesh body. It’s hard to even find a decent beard set to wear (shoutout to Wavie Haller for coming through with Valiant, though). You start to wonder if you should just switch to a female av instead.

Or maybe you’ve got an SO who doesn’t want to/is terrible at dressing himself. You’re tired of this guy looking like he crawled out of 2010; he needs to update his av asap. 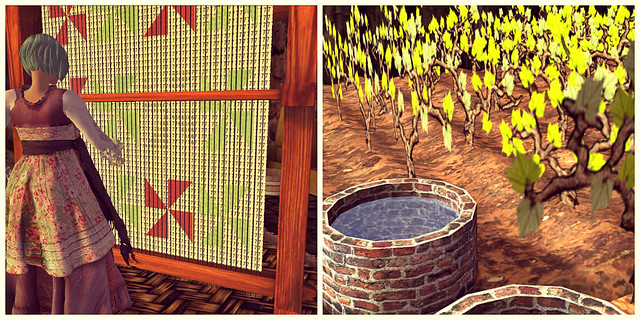 G&S shots of weaving and farming.

I love farming and fishing. When I was a kid, my father took me fishing all the time. My stepmother kept our backyard filled with plants, and taught me the importance of keeping a garden. I love both of these so much, I’m more likely now to play video games that feature these two activities.

Imagine my joy when I discovered both the Life2 and G&S systems in Second Life. Although clearly meant for different time periods, both systems feature cooking, gardening, and eating to keep your energy up. Life2 is more for the modern period, geared towards city sims with families. G&S is created with Gorean and medieval sims in mind, expanded to include mining, crafting, carpentry, fishing, and raising animals.

For the player who wants to invest and bring more entertainment to their SL experience, the task of figuring out which system is best for them can be daunting. Which one should you pick? Thankfully, I’ve shelled out the cash on both of these so you don’t have to–read on to check out my comparison of both.