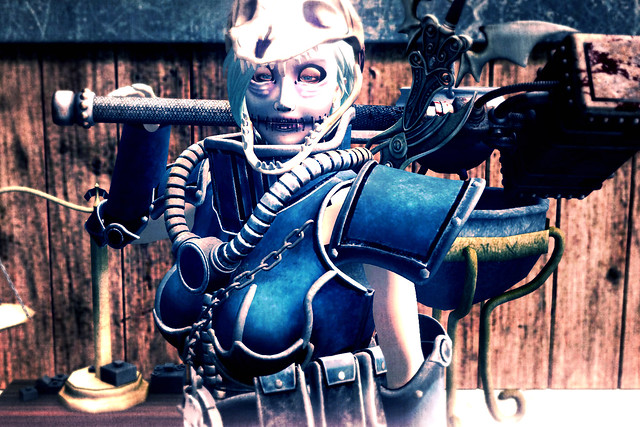 We <3 Roleplay is back for another round of awesome stuff to make your SL more fun! Because of the inevitability that I won’t be able to showcase everything, I advise you to check out this shopping guide and see what’s for sale. Some of the really cool things that stuck out to me immediately, I’ve included in this shot. I’ll do another post with dresses later.

For now, though, I wanted to show off these awesome weapons from BAMSE and Empyrean Forge, as well as the animal skull from Yummy. I combined these with a cool armor set from Heretech for a look that lets me blend in with a battle sim like Chaos Indivism‘s (btw they’re recruiting right now).

With so much that We <3 Rp is offering, battle sims are something I’m becoming interested in. When I’m not golfing in SL, gardening, or sailing a boat on the Blake Sea, I like running around and blowing people up in combat. Think of combat sims as a neverending game of paintball, but with bombs. You don’t have to become a part of an SL military group to shoot people on a sim, but you should observe the rules when you visit one.

My top advice for engaging in combat in SL is: it’s fun, so don’t get angry if you die a lot. Everyone dies. Then they respawn and come back again. That’s video games for you! So if you visit a combat sim, set your home to the spawn point and remember to laugh.