We Need To Talk About Racism On The Grid Note: Plurk images have been moved to a mirror blog.

The man in this picture could be anything. He’s got fair skin and light eyes. His long hair are put into braids, and his cheekbones are prominent. Even if he didn’t match the race you think I said he was, he is that because I deem him to be.

He is me–as a male, in the grid. I created him to be more creole-looking than my female counterpart, which I still think doesn’t look that Caucasian to me. Before I donned a mesh head with either gender identity, my avatar resembled my grandmother–a creole woman who would probably cut her hair short and dye it bright red if she were the age I am now.

Even if I change bits of myself in the game, I carry my heritage with me. I know other black users who along with me, mix and match hair, eye colors, and skin tones. We don’t do it to escape–but some black users do. I don’t fault them for it because I understand the grid isn’t very tolerant of us.

Second Life has been used as a means of escape for so many people. In the end, though, we’re just that–people. It’s inevitable that things like civil rights would rear their head here after a while. Especially when you get incidents of users being silenced when talking about racism.

[removed image: the author attempts to get someone to understand how an atmosphere of intolerance is a terrible thing to have in SL. it doesn’t work.]

Even though irl I’m more fair-skinned than the average black person, I still see glaring examples of racism in Second Life. A search on Marketplace and in SL with various slurs will show that vulgar names to describe blacks will outnumber other slurs by three times as much. The result is the same whether it’s on Marketplace or in the grid itself. 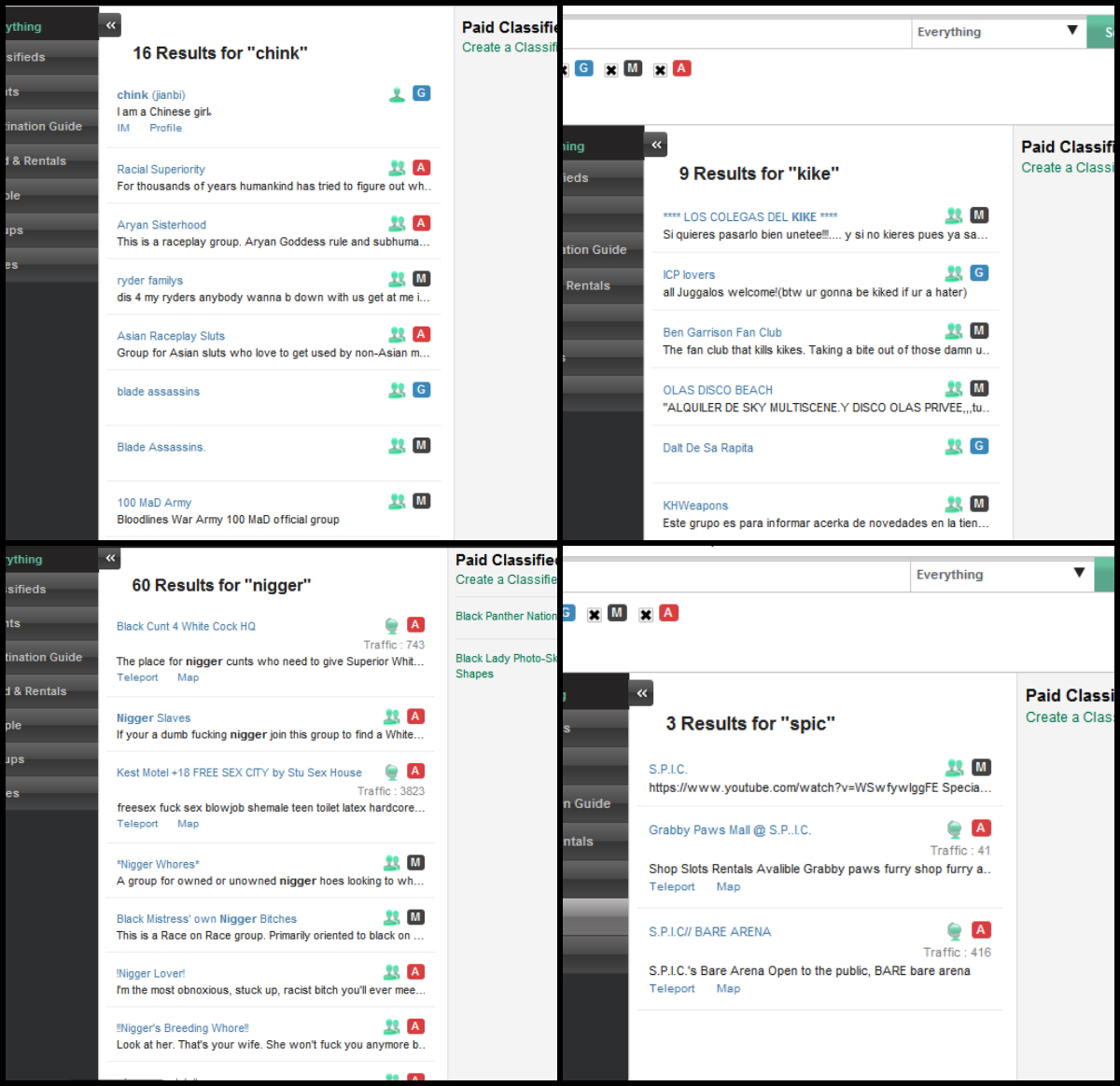 Here’s the Second Life search results. And here are the results for Marketplace: 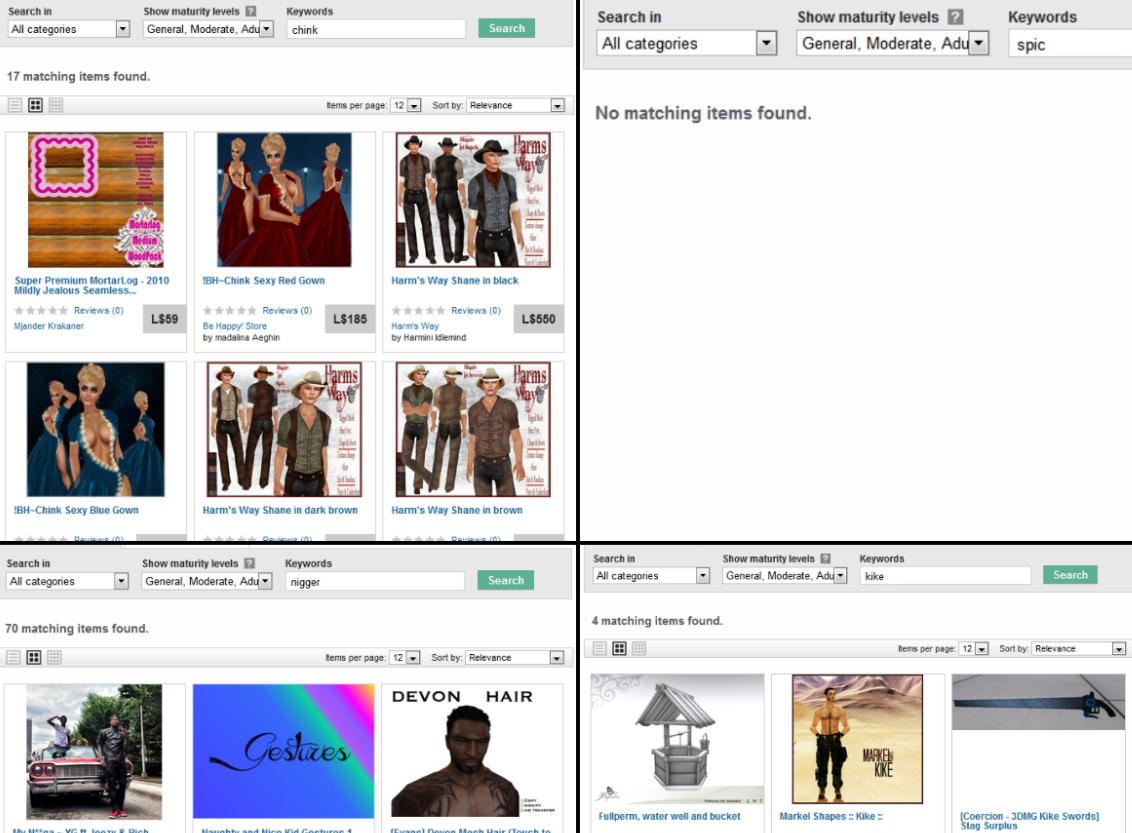 With this alone, I could talk about what this indicates about our grid and what we value. Understandably, a large proportion of SL’s userbase is white. But does that mean we have to make others feel unwelcome?

Can we talk about how blogger Kaelyn Alecto celebrates Sinterklaas every year and posts pictures of blackface on her Plurk timeline, and then defends it when users get outraged? Or how about the practice of sexualizing Native attire? What about slavery fetish sims based on race? What about the fact that event themes by and large seem to be slanted towards Western views?

If you think what I’m bringing up is personal, it’s because our userbase is small, and it’s getting smaller by the year. We can’t afford to ignore this subject anymore–not when there are less and less users in SL as time goes by. There’s less places to run from the issue of equality on the grid when you keep seeing the same people over and over.

[removed image: Harlow and a group of friends ridiculing the author for being upset at someone derailing a talk about racism, when they thought she wouldn’t see the thread. The image is hosted on a mirror blog.]

Yesterday, Whiskey Monday posted a plurk thread describing getting in trouble for being racist on her job when she wasn’t. Several black users spoke up and assured her she did nothing wrong. But one user spoke over them, a white male, and after a while his tone was nothing short of aggravating.

I challenged others to turn their attention towards the grid if they really did care about minority voices. What followed were some pretty terrible conversations (see the first picture of a discussion), where in the end I lost my temper and ended up telling off the more daft users of the thread. Then, someone else posted pictures of cats in the thread to aggravate me even further. So the picture above stemmed from that.

Why do that when someone’s trying to address racism? Oh, right. Because you think they’re overreacting.

Then there was someone jumping in the thread when they thought myself and another user were misgendering a trans male. Even after an apology and explaining I just wasn’t aware, I was told my words were “linguistic violence”. Hey–remember we were talking about racism? No, I understand. You want to latch on to anything in order to avoid it.

So I was told to tone down my message. Make it easier to digest So, I gave it a shot.

Turns out, it doesn’t work. When people don’t want to listen, they won’t listen. But doesn’t mean the problem goes away.

I’m sorry if you’re reading this and think that white privilege is expected to be a cross for you to bear. It isn’t. ALL privilege is for people to defeat by stopping and considering where others are coming from. Not laughing at them when they’re upset and hurt. Not focus on yourself and continue to feel persecuted when they apologize and say they made a mistake in their pronouns, and ignore their complaints about unequal treatment. How could you? Especially if you’re a Jewish or queer user, you know know damn well by now what another minority is talking about.

I get it. It’s a hard subject to talk about. But I’m sure we can start with something simple:

Ban the search of slurs, any slurs, in SL, just like LL has stopped the search term for “casino”. They did it with skill gaming because it meant getting into legal trouble. But the ToS also prohibits hateful behavior. Can we start with this measure? It would begin the process of making our grid a more tolerant place.

Second Life, you aren’t as great as you make yourself out to be.

Please leave your comments in the thread. Remember to keep them respectful. Thanks.

PS: don’t leave comments being upset about me sharing how callous this community is. You put yourself in that hole by being a bully.