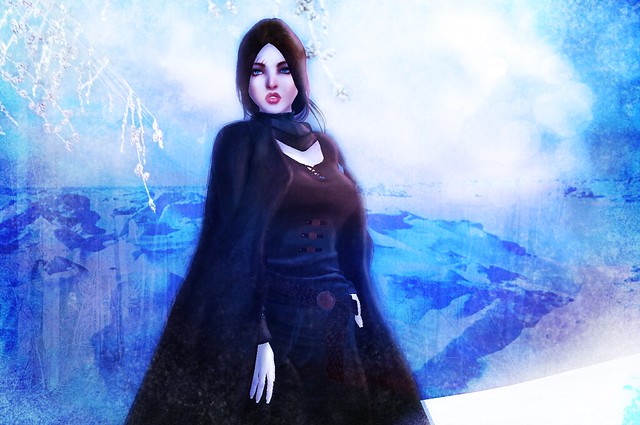 “What failure? Where?” you ask, because the title of this post is certainly intriguing, isn’t it? There’s no failure in this picture. But ah, that’s where I’ve got you. It’s on my face. Look closer.

You probably recognize it–a style of skins I’ve attempted before. I released three in the past, plus one mesh head that didn’t sell too well. Would you like to know something else? There were seven more skin attempts I went through that never saw the light of day. I never showed anyone anything because I was afraid of people laughing at me.

I worked on this one after creating an amalgamation of my failure skins together, blending each face until a new one appeared from the combined Photoshop layers. I kept working on them, and then put them on several different mesh heads to see what spots on the face needed improvement and what didn’t. When I was done, I showed my friends. And many of them liked it! I was shocked because–all that failure. All that failure. What made the “no” finally turn into a “yes”?

Passing that threshold for a lot of people also means crossing a line of fear. You are not used to “yes”. You’re used to “no”, “stop”, “wait just a little longer”, which after a while you accept future notions of rejection and stop putting in so much effort. You accept yourself as less-than, you stop reaching so high. When a “yes” finally appears, it becomes you that is hesitant. What if you proceed only to find another “no” somewhere down the line? What if someone doesn’t like the idea of you doing well and tries to make that happen for you?

If you think I might be using the progress of creating a skin as a larger metaphor, you’re right. I might even be talking about another area of my life right now, a parallel story in rl that I may never tell you.

Life is full of secret skin failures. Each one held a lesson for me in what mistakes I made in the past. And I think it’s funny that by combining them, I created a skin that works. Maybe not everyone would like it, but certainly a lot more than in the past. And that’s a good enough starting point for me. I can build from there.

You can, too, with whatever you’re doing. Sort through those failures. Collate them and think about what lesson each one held. There’s a “yes” if you combine them. It’s all in the arrangement.

*available at We <3 Roleplay this month.

Song: Eduard Artemyev – “Siberiade” Theme
(which was later remixed into a popular version by PPK)