I had on mesh clothing with the exception of some texture jeans from Mon Tissu, for layering purposes with my Fashionably Dead sweater. My Clawtooth hair hung just right around my shoulders, curling in at my neck, fresh from the C88 sim and looking good. But it wasn’t enough for me–it was all too new, too with it. And according to K-Hole and Tumblr, who had declared the new fashion movement of #normcore (Tumblr by accident, admittedly), I was too modern and needed to go back a few years to make myself more in-the-moment. I needed the blandness of instinctual color pairing, knowing what shades went together, the right structure of negative space versus content in a picture that would represent the meaningless of life.

See, according to the fashion magazines and experimental blogs online, what’s actually cool is virtual reality. The two foremost mediums of that virtual reality gracing blogs and fashion mags right now is earlier versions of The Sims, and 2007-era pics of Second Life. Some people are unaware right now that their pictures are being yanked from Flickr and shared across blogs everywhere, not exactly parodied but halfway that, plus glorified for their alter-persona living their pop-culture-pixel dream against a computerized landscape. IMVU comes in third, with their retro-now-ness being the ‘it’ thing, but still coming in last for lameness and popularity.

And the more aimless your Flickr picture is, the better. Is your alpha missing on a shoe from an old photo of you sporting a sculpty heel? That is so #normcore. Are you sporting a polo from a freebie sim? That’s #normcore. Got a texture pirate shirt you snagged from a marketplace store? That’s so #normcore it’s possibly #seinfeldcore. And the fact you’re dressing so retro as what people imagine Second Life avatars *should* be dressing like, is so meta and lame that it makes you cool.

So how do you get the #normcore look? What can you do to seem cool?

Here are some tips to get that virtual-meta-core fashion without tipping the scales into trying-too-hard territory:

1. Shop at freebie stores and buy texture clothing from your favorite shops. The older, the better. Seams are IN. Sport it without shame. You are the user who doesn’t live too much with their avatar, who flirts shamelessly with errors and a margin for the human element. Bonus if you find Chip Midnight’s clothing. Actually even his most recent stuff from Futurewave is still pretty #normcore, due to its self-awareness. Even his new mesh avatar is #normcore because it’s cyberpunk, and since we’re playing an online game, cyberpunk = webpunk. Actually, okay. All cyberpunk clothing is in. Ask Sian Pearl. She was actually in Novembre magazine recently (YOU NEED TO BUY THAT ISSUE BECAUSE IT IS SO NORMCORE IT IS TOO COOL FOR YOU AND SHE IS THE COOLEST AVATAR IN SECOND LIFE CURRENTLY. NO THIS IS NOT A JOKE.  THIS REALLY HAPPENED.).

2. Ruth your hair. Yes, that’s right. Ruth it. Ruth it all day long. If you aren’t brave enough, just use old sculpt hair. Buy old hair from B@re Rose in a funky color, or old Nylon outfitters creations. Boom! #normcore at your front door. You are so cool without realizing it.

3. Don’t flaunt it. Don’t go overboard. It’s okay to sport SOME mesh stuff, just don’t go completely there or else it’s like you’re doing too much. You want a little retro for your look or else hel-lo, 2now4us.

4. Don’t wear an AO. AO’s are for people into their avatars. Are you into your avatar if you’re #normcore? No. You are not.

Now you’ve been transformed, go into Edit mode and stay that way forever. Your arms held out like Moses parting the sea, you’ve opened a path into the future, a personal virtual sidewalk that paves the way into your #nowness forever. You are the dream of the forever online young adult searching for meaning in their life. Engage. Move foreward. Never look back, or you’ll turn into salt. 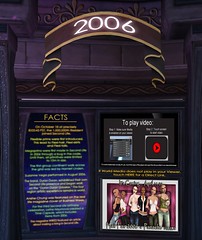 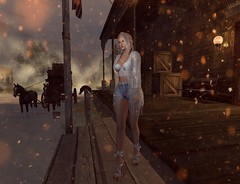 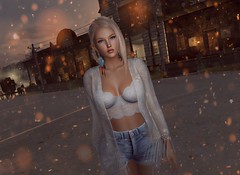